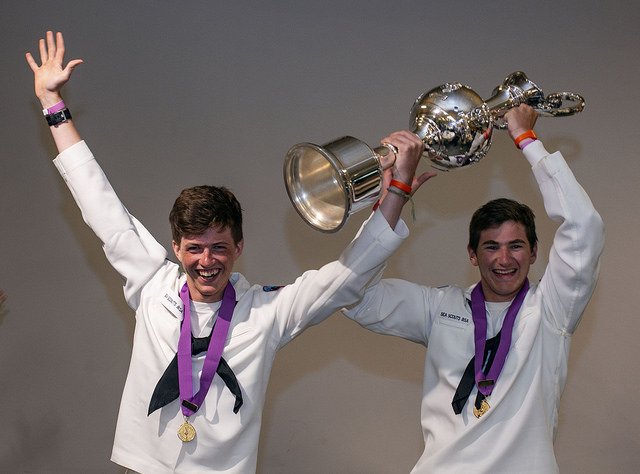 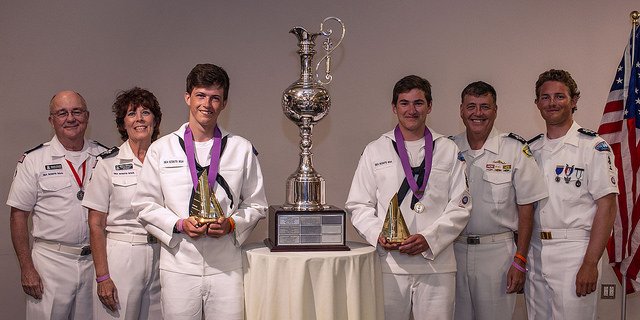 The 2018 winners of the Koch Cup, were Max Katz-Christy, 17, and Thomas Craciun, 17, both from Cambridge, Massachusetts.  Robert Gustke, 19, and Andrew York, 19, from Bridgeport, New York and Baldwinsville, New York sailed into first place to take the Kiwi Cup.

“I would like to congratulate the winners of the Koch Cup and the Kiwi Cup on a job well done. But I identify more with the sailors that did not win” said Dr. William I. Koch in a statement.  For those who did not win he gave the following advice “Losing is a good thing. I learned valuable lessons from each loss. So do not think of yourselves as losers, but rather winners in progress.”

Both Katz-Christy and Craciun are members of Sea Scout Ship Brutus (131) of the Spirit of Adventure Council and  will graduate in 2019 from Cambridge Rindge and Latin School.

This year’s Sea Scout Cup participants ranged in age from 15 years of age to 20, with two of the participating teams composed of siblings. Teams traveled to Galveston, Texas from as far as Brazil, Australia, Poland, Ireland and South Africa.

The Sea Scout Cup also awards participants on sportsmanship and seamanship, where each year competitors vote for the winner of the honor. This year returning brother and sister team from Australia, Eamon Gray and Orla Gray in the Koch Fleet and Michigan Sea Scouts, Tess De Wilde Kohler and Nicolette Loeding in the Kiwi Fleet were recognized for the distinction.

For more information about the William I. Koch International Sea Scout Cup, visit the website http://www.seascoutcup.org.