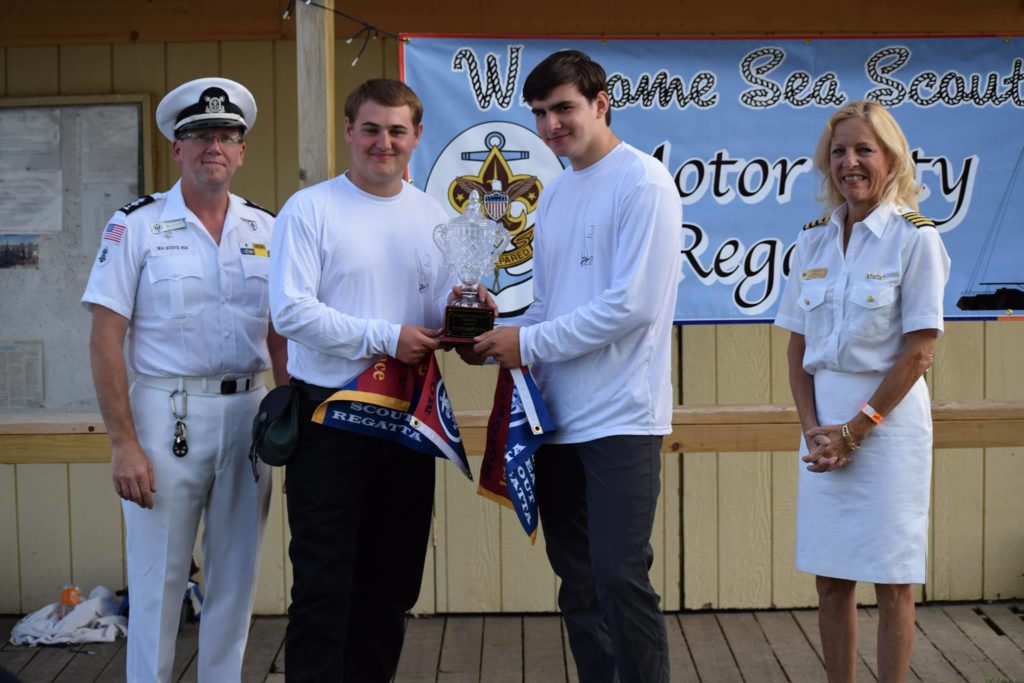 Detroit Yacht Club, Detroit, Michigan – – – Skipper Brian Foley with his crew Lubos Koudelka won the Motor City Qualifier Regatta. They will be going to the Koch Cup international Sea Scout Regatta in 2018.
The Motor City Regatta was held on the Detroit River off of the Detroit Yacht Club on a breezy Saturday, August 5, 2017.  The Detroit Yacht Club was joined by the Detroit Boat Club and the Edison Boat Club as sponsors for the 2nd time.  Eight crews from four different Ships in the Central Region participated in Flying Scout sailboats provided by the Detroit Yacht club along with three safety boats.  The Principle Race Office was Linda  Minsterman, a member of the Detroit Yacht Club and the Bayview Yacht Club.  Alan Minsterman was the Race Committee Chair and a Past Commodore of the Detroit Yacht Club.  All crews went out for the first race of the day but since their skill level varied, some felt it was prudent to return to the DYC docks.  Racing was suspended and lunch was served.  Then the wind on the river had abated a bit and racing resumed.  After four afternoon races were completed, the Motor City Regatta was successfully completed.  Dinner featuring burgers and hot dogs was enjoyed by everyone including parents, Ship 1148 adults, and Race committee members.  Followng dinner, all 8 crew members were presented a race flag by Ship 1148 Skipper Tim Branson and DYC Commodore Patricia Thull Obrien.